Florence, Salzburg, Bath, Lviv... what do they all have in common? Well, they're a handful of those lucky cities that are embraced by greenery on all sides. As Mother Nature begins to boast her Autumnal colours here in the Lion City, it's time to get out and about. And not simply to Wysoki Zamek (High Castle), with its admittedly wonderful view over the surrounding hills, but also to the city's parks.

It's fair to say that Lviv's parks are amongst the best-loved features of the city. The most famous of all is Stryjski, founded all the way back in 1876. Stryjski was the subject of a cheeky pre-war song about amorous adventures amidst the flowerbeds, and the park is still a firm favourite with young lovers. Sit by the pond and whisper sweet nothings to your soulmate as the swans sail by... Hmmmm, nevertheless, spoilsports that we are, we have to confess that we've spotted some lively members of the rat kingdom hanging out in the swans nests from time to time. But what of it? If you've read Kenneth Williams's 'The Wind in the Willows' you'll know that water rats are in fact charming fellows who row boats and drink ginger beer. 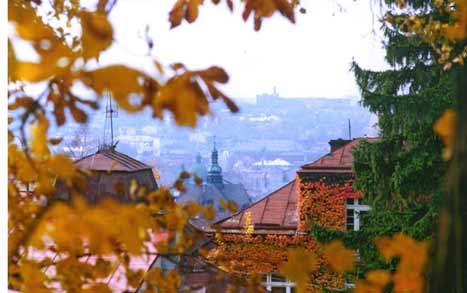 Another pretty spot is the Ivana Franka Park, just in front of the university. Here you'll see mothers playing with their children, picking up the golden leaves that dot the pathways. Make sure you pay a visit to the magnificent Sw. Jury Cathedral (St. George's). Alongside this rococo glory is the palatial residence of the Greek Catholic Archbishop of Lviv. He surely has the best pad in the city, and the best view with it. Pope John Paul II stayed here when he visited the city in 2001.

For a different spin on the park phenomenon, you might try the expansive Bogdan Chmielnicki Park. This 26 hectare number was a Soviet enterprise, originally given the somewhat unimaginative title, The Park of Culture and Recreation. There are plenty of artistic relics of the old era here, although the obligatory Lenin monument has been given the flick.

Finally, you mustn't forego the chance to climb the steps to Wysoki Zamek. This has always been one of Lviv's most magical spots. Stanislas Lem even called his beguiling memoir of Lviv after it. There's not much of the medieval castle left these days (nor was there a hundred years ago for that matter - the castle was little more than rubble by the close of the 18th century). Nevertheless the view is marvellous. One last tip, a little bird has told us that ladies should on no account consider braving the steps in high-heels - especially when winter begins to descend...