The earliest records report Kolobrzeg a 6th/7th c. settlement sitting up ca. 4 km up the Parseta river. Apart from fishing, since 10th c. its residents were mostly engaged in producing salt by evaporating it from locally springing brine.

The history of Kolobrzeg is intertwined in the national history of Poland and Germany, and equally as complex. For many centuries Kolobrzeg passed from Polish to German hands and back again, and German bishops had their fair share in christianization of the area. The name Kolobrzeg comes from the name "Salsa Cholbergiensis" (The Salt City), as the German annalist, Thietmar described this wealthy settlement at the beginning of 11th c. The town's rank grew even more when in year 1000 Kolobrzeg was made a bishopry, which equaled it with Polish metropolises of the time, Krakow and Wroclaw.

In the medieval times both Kolobrzeg and the whole area of Pomorze developed, owing to farming, craft and trade. On May 23 1255 the city of Kolobrzeg received official foundation act, and was growing rich owing to favourable laws. In fact, with time it grew to have its own war fleet. The "white gold", as the salt was then dubbed, earned Kolobrzeg a pass to the guild of medieval trade tycoons, the Hanseatic League. The 14th and 15th c. saw 18-hectare Kolobrzeg, with sturdy brick houses, as well as a city hall and many public utility buildings. However, the city was far from the happiest place in the world: the majority of citizens was of Germanic origin, and the Slavic minority enjoyed only limited civil rights and was banned from the more profitable occupations.

Along with all-European wars of the 16th and 17th century and the decline of the Hanseatic League the economic regression of Kolobrzeg started, kindled by severe competition in trade and salt production. In 1653 the city was taken over by Brandenburg and engirdled by massive defence walls and fortifications as Festung Kolberg (Fortress Kolobrzeg). By 1800's the city had been attacked several times in several wars and subsequently, severely deteriorated.

When in 1872 Kolobrzeg's fortress status was annulled, everything changed. The war trenches were filled in, the salt works were dismantled, and pensions and spas started shooting up like mushrooms everywhere. The city's crown jewel was the magnificent Spa House (more likely a palace), printed on virtually all postcards of the time, along with the lighthouse and city park. Both vacationers and patients started swarming in, and a rapid development of the city followed, facilitated by a brand new railway connection to Berlin, Poznan, Gdansk and Szczecin. Natural gas and sewage systems completed in the city, along with new hospitals, churches, department stores, restaurants and a theatre made Kolobrzeg an attractive place to live. By WW I the city ca. 25.000 residents lived here, both Poles and Germans.

WW I caused Kolobrzeg to become a far cry from the pre-war seaside resort it used to be. The city's authorities did what they could to attract guests from Germany and Sweden, by raising the spa service standard, and organizing various all-year round attractions and events, and by 1930's Kolobrzeg was back in holiday business.

However, when fascism entered the local political-social life, political freedom and civil rights were limited, and persecution of Jews started, but the real war life commenced only after Germany attacked the Soviet Union in June 1941. All production was switched to military purposes, and pensions and spas were turned into military hospitals for the front convalescents, whereas Polish residents were harassed and used as slave labour. In 1944 the Nazi propaganda shot a motion picture "Kolberg" at Kolobrzeg beaches, a reenactment of a victorious defense battle agains Napoleon, however the film didn't manage to make it to Kolobrzeg cinemas. The front was coming, and all hell was about to break loose.

By Hitler's order, in 1944 Kolobrzeg was made a fortress again, and by March 1945 the city was ready for the Soviet Army. First attacks proved a failure, however, as the Nazi troops, along with civilians, fiercely defended the city. The losses were great on both sides. "If in 1807 the Napoleonic troops could not conquer Kolobrzeg, all the more the Polish troops won't have it now" replied the defenders to a surrender call on March 14th, and mass attacks continued, along with fires and destruction. On March 18th, after 13 days of fierce shooting, the battle was over, having devoured thousands of lives. Material losses included 75-90 percent of buildings.

Late afternoon on March 18th a symbolic Wedding to the Sea took place, a patriotic ceremony, during which Corporal Franciszek Niewidziajlo gave a speech, saying: “We have come here, to the Sea, after a hard and bloody effort. We see that our effort has not been wasted. We swear that we will never leave you. By throwing this ring into your waves, I am marrying you, because you have always been and always be ours”. Following these words, into the sea waves went a symbolic platinum ring. In the early spring of 1945, a number of symbolic Weddings to the Sea took place along the Baltic Sea coast, and every year, patriotic events take place on March 17, and the ceremony is repeated by mounted reenactors, with rings thrown into the sea.

The post-war reality was grim though: he Red Army took over Kolobrzeg, and whatever valuable was left in the city was spoiled. Corpses lay among ruins and what was left of the city centre after heavy bombarding were stumps of chimneys. Kolobrzeg had to be reborn from the ashes, and it was, again owing to its unique microclimate. In 1950's major repair works started, though the socialist architecture irreperably flawed the city's landscape. By 1970's Kolobrzeg was again called the summer capital of Poland, hosting ca. 200,000 holidaymakers every summer. 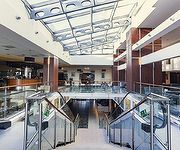 Arka Medical SPA For those who value quality

Organic Shop Healthy lifestyle is what you need 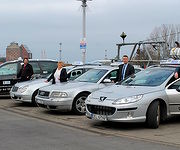