Churches and Cathedrals in Minsk

Although the Belarusian constitution does not declare an official religion, the dominant faith in Minsk, and Belarus as a whole, is Eastern Orthodoxy. Roughly 80 per cent of the population consider themselves Orthodox Christians, members of either the Belarusian Orthodox Church or the Russian Orthodox Church. A significant portion of Belarusians are Roman Catholic (around 20 per cent), owing to the country's history with its western neighbors, and Poland in particular.

While the city was once home to a wide variety of beliefs and houses of worship, the vast majority of churches were destroyed in the war (along with the rest of Minsk). The Jewish population was wiped out. As the city was reconstructed, the ruling, officially atheist, Soviets paid little attention to rebuilding religious sites. And those buildings that remained, generally served alternate purposes to worship in the Communist era.

As a result, Minsk is home to only thirty or so churches, and only a handful are of historic or cultural interest. Below, you'll find a few tips for Orthodox and Catholic churches worth visiting in Minsk. 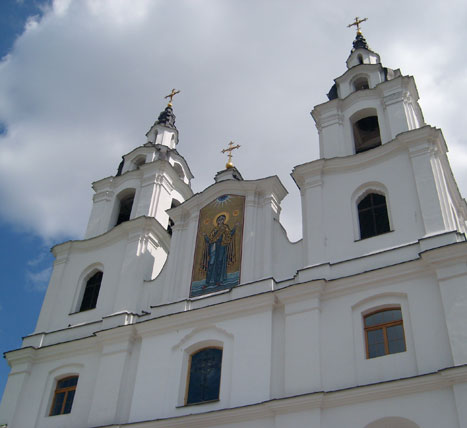 Cathedral of the Holy Spirit, Kirilla i Mefodiya 3
One of the most visible churches in Minsk, with its central location overlooking the Svisloch river in the historic Upper Town, the Cathedral of the Holy Spirit is the most important Russian Orthodox church in the city. Its origins date back to the 17th century when the building served as a Catholic Bernardine monastery. After several devastating fires and a conversion to Orthodoxy, the church was expanded and renovated, though the monastery was closed in 1922. The church's holiest icon is the image of the Mother of God, which is said to have been found by Minsk residents in 1500.

Saints Simon and Helena Church, Sovetskaya 15
Often called the Red Church, this Roman Catholic house of worship is relatively modern in Minsk standards, having been constructed between 1905 and 1910. The iconic red brick building is instantly recognizable from Independence Square, where it can be easily seen next to the government buildings. During the Soviet period, the church served as a cinema, film studio, as well as a museum of Belarusian cinema.

Mary Magdalene Church, Kiselyova 42
Built in 1847, Mary Magdalene is a visibly Orthodox church, complete with a quintessentially Orthodox onion-shaped dome and octagonal bell tower at the church's entrance. Once serving as a a state archive during the Soviet era, the church was the first in Minsk to be handed back to the community after independence in 1990. You can also find a monument marking the 200th anniversary of the Minsk diocese here.

Virgin Mary Cathedral, Svobody Square 3
With one of the most beautiful church interiors in Minsk, the Roman Catholic Virgin Mary Cathedral was built in the early 18th century in a Baroque style. The site was first home to a Jesuit monastery, and was opened and closed several times throughout its history. The two bell towers were even demolished completely in 1951, though it was eventually rebuilt to its original appearance.

Saints Peter & Paul Cathedral, Rakovskaya 4
This baroque Russian Orthodox church is officially the oldest in Minsk and the only Renaissance building in the city, dating back to 1612. The cathedral is officially listed on the Republic of Belarus' Architectural Monuments of National Importance. Throughout its history the church has been closed several times, including in 1933 when members of the church's clergy were arrested and shot on the spot. After the war the church was also closed for a prolonged period, and was used as an archive of scientific and technical documents.