What to Eat in Minsk

Wondering what to expect on your plate in Belarus? Meat and potatoes is a bit of a stereotype in this part of the world, but it's certainly not far from the truth. Similar to the cuisines of neighboring countries Ukraine, Russia, Poland and Lithuania, Belarus puts a lot of emphasis on pork, dumplings, soups, as well as the mighty potato.

As with all countries belonging to the former Eastern Bloc, Belarus' colourful culinary history, developed through centuries of international trade, was almost completely lost in the grey, dreary days of communism. What has remained is both a dependence on the simple staples promoted throughout Belarus' Soviet past, as well as a renewed interest in national culinary heritage. But the best way to understand it all, is to simply get eating!

Here are a few popular Belarusian dishes to get you started:

Soups
A traditional Belarusian dinner must always start with a soup. Hearty soups made from beetroots or cabbage are popular, as well as simple meat-based bouillons. Summertime visitors should definitely try khaladnik, a chilled version of the beetroot borshch. Make your soup a meal by nibbling on a few pieces of the ubiquitous rye bread.

Draniki
This much-loved Belarusian national dish shows the region's historic Jewish influence - draniki are essentially potato latkes, though who influenced who is still under debate! To make draniki, grated potatoes, mixed with flour and egg, are formed into small pancakes and shallow fried. They can be stuffed or served with a variety of toppings including mushrooms, pork, sour cream (often sweetened with sugar), poppy seeds, or fruit. 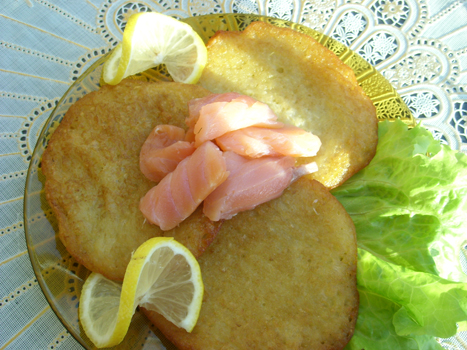 Dumplings
Belarusians love dumplings and the truly authentic national dumplings are kalduny. However, Russian pelmeni and Ukranian vareniki, which vary only slightly in shape and texture, are also popular. Similar to draniki, dumplings can be filled with a wide variety of ingredients either sweet or savoury. Popular fillings include: ground or pulled meat, mushrooms, cabbage, or fruit (berries in particular).

Babkas and Stews - Ceramic Pot Cooking
A lot of traditional Belarusian dishes are baked in the oven in a ceramic crock-pot, such as the potato babka (typically made from grated potatoes, eggs, onions, and bacon). Ceramic pots are also often used in making stews, with ingredients like pork, potatoes, mushrooms, and other seasonal vegetables.

Tips for Vegetarians
Despite the literally hundreds of potato-based dishes in Belarusian cuisine, vegetarians might have a hard time finding a dish completely free of any meat products - even if it is just those few pieces of bacon in a potato babka. The best choices for veggies are usually draniki and dumplings, which are often filled or topped with meat-free ingredients. Beware of seemingly veggie-only soups - even these are nearly always based on a chicken, pork, or beef stock. If in doubt, the best thing to do is ask!

One last thing...
Still worried about contaminated food post-Chernobyl? Don't be! Food is quite safe and it's not a major concern for Minsk's residents. While it is true that Belarus took a huge hit of the radiation cloud from the 1986 Ukrainian disaster, only the south-eastern portion of the country is still considered under any threat of food contamination. With this in mind, avoid shopping for food (especially items like mushrooms or fish) at shady markets, and stick to grocery stores and supermarkets - though even if you did eat indadvertedly eat a contaminated mushroom, the risks are minimal with such a small dosage. And unless you fancy the popular and rather strange-tasting carbonated mineral water on sale in shops, you might as well embrace Minsk's tap water - also quite safe for drinking!

Very interesting. I am hungry already!