Though the first mentions of Krynica have been dated to 1547, the city's path to genuine prominence and wealth started in the late 1800's.

The dawn of the 14th century saw the first settlers in the area of today's Krynica, called 'Krzenycze' at the tme, though those lands have been run by Krakow's bishopry since 1280's. For many centuries the name of the village revolved around the idea of a crystal clear water spring or a water vein, which proves the common knowledge of the beneficial waters springing from the underground. For many years the local community grew slowly, yet steadily, being involved in farming and herding, later also in wood processing and weaving.

After 1770 the whole area of Nowy Sącz lands, including Krynica, became nationalised and included in Galicja region, later taken over by the Habsburg empire during the Partitions of Poland in the late 1700's. Oddly enough, the foreign domination worked out well for Krynica, as this was the time when the town actually was first born as a health resort. 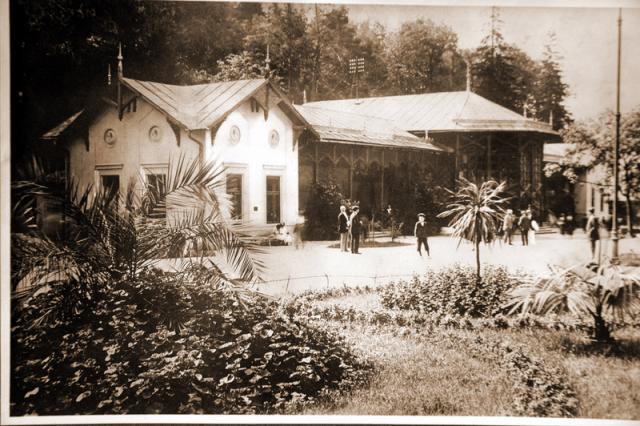 On April 24th 1793 a Habsburg official, Frantz Stix von Saunbergen redeemed some lands from local owners, along with one mineral waterspring, now known as Zdrój Główny, with a sole purpose: to build a lucrative Spa. He then secured the spring and erected first resort buildings, inluding the Little House (Mały Domek). Several years later the land was taken over by the state, and the expansion continued. In the beginning of the 19th century secured were the water wells, and the mineral baths and the boarding house for the patients were erected. Soon followed even more new features, such as a park with numerous arbours, and a network of access roads. All that, atop of some good money coming from the imperial cashbox, and some fine doctors residing in consultation, brought Krynica a few fat years. Unfortunatelly, the lean years also followed, caused by appalling management of the resort, and the final stepping in of history, when the European Revolutions of 1848, known as the Spring of Nations, brought a downfall both to the Habsburgs, and to the town.

The true revival came along with one person: Prof. Józef Dietl from Krakow's Jagiellonian University, the father of Polish balneology, who in 1920's renderd Krynica and its mineral water springs famous nationwide. A special committee under his lead declared all previous arrangements null and void, and introduced a number of new regulations, some of them still valid (e.g. a health resort fee).

The golden age of Krynica commenced henceforth. Under a brilliant leadership of Władysław Zieleniewski, MD, Krynica flourished to become the top Galicja health resort. New resort buildings and facilities sprang up in the city centre, as well as private villas and pensions for the guests, some of them welcoming guests until the present day. The resorts offer was broadened, with a variety of baths, water jets, inhalations, and even electrotherapy.

Following the patients, in flocked the contemporary celebrities, such as actors, singers and painters. Being somebody meant visiting Krynica at least once in a while, and the town became a synonym for great entertainment. The town has established a resort orchestra to entertain the guests, and a theatre from Krakow was being invited for performances. All major pensions and guesthouses held afternoon teas, soirees and charity balls to support further development of Krynica.

In that time the new springs were intensivelsy sought after, to provide more beneficial water for treatment sessions. In 1884 the head of Hydrotherapy Resort become Henryk Ebers, MD, a most talented physician, educated in Krakow, Vienna and Paris. His facility was considered state of the art at the time. 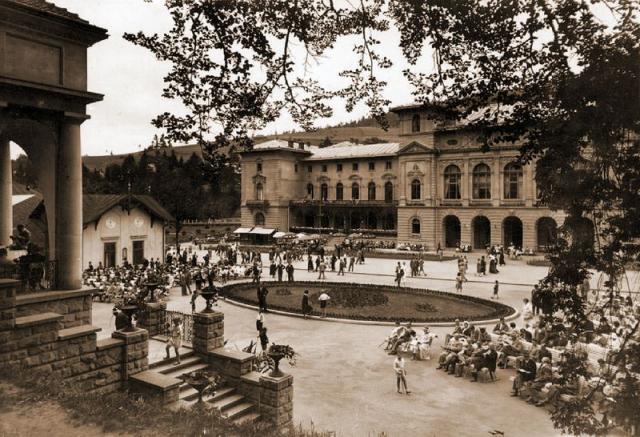 Ebers was more than just a talented physician, he was a genuine benefactor of Krynica. He invited to Krynica a renowned geologist from Lviv University, Prof. Rudolf Zuber, who found a unique water spring later named after its discoverer, Zuber. Moreover, he begged off the Austro-Hungarian government a concession to build the missing train conection between Muszyna and Krynica, succesfullly accomplished in 1911. The most heroic and glorious achievment of Ebers turned out, though, the successful intervention with the Russian military during WW I. The Russian troops were about to storm Krynica, and Ebers managed to persuade them that Krynica was a Polish resort, and not Austrian.

Krynica went through WW I fairly untouched, but definitely run-down for a period of time. In 1918 the new director of the resort became Leon Nowotarski, and owing to his apt management Krynica regained its former significance. The interwar period saw a second construction boom in Krynica that included new mineral baths, the new Spa House and a number of villas, pensions and hotels, including the then luxurious Patria, owned by a world-famous opera singer, Jan Kiepura. Also, the sports facilities were improved, with a furnicular railway to Mt. Parkowa, and a restaurant and observation deck atop of it. Th highest peak in the area, Mt. Jaworzyna became equally a big attracton, as on its slopes a ski jump and a toboggan run were build, as well as a mountain shelter on the top.

When WW II broke out, Krynica was taken over by the Nazi government and turned into a resort for officers and the recovering soldiers. The city itself survived, though the resort's therapeutic equipment was damaged, and a variety of civil buildings, especially belonging to the Jews, destroyed.

Intoducing communism in Poland left an infamous imprint on both the town's looks and spirit. The main promenade was renamed after Joseph Stalin, many stylish pensions, among them 'Lwigrod' and 'Patria' had been nationalized, and the architecture of the newly build resorts was nothing like the alpine chalets of the past. Nevertheless, Krynica thrived in the new reality, ever as popular as before.

When in 1989 the local government, finally unleashed from the curb of central planning, undertook a deep assessment of Krynica's potential, it turned out that the polluton levels were too high, and the standard of boarding was appalling, as well as the condition of the public and sports facilities. Within the next few years the new, democratic authorities took Krynica to a new dimension in terms of ecology, aesthetics and infrastructure.

Nowadays, with its state of the art facilities, abundant tourist offer and breathtaking charm, Krynica can again boast the just name of 'The Pearl of Polish Resorts'.

My husband's grandfather and his brothers and sister came to the US in the late 1800's. from Krynica.

MOSiR - Ice Rink David Johnson: Can I get skates sharpened there? Nikifor Museum Colin: I went to this museum some 18 years ago as I love Nikofor's works, and I have two of them purchased at auction in Warsaw. Unfortunately his is much forged, so his prices are very low. If visiting the museum, try for a longer stay at one of the many spas in the town which are world class and cheaper than Europe (I hope, as they once were). CAB PL Adam: Quick and easy to book. Driver on time. Clean and comfy taxi. Recommend. CAB PL Marcin : Im using taxis CAB PL quite often from Balice airport , great service, resonable price. Recomended.