It's easy to get lost for hours wandering the Tiergarten's countless paths, creeks, and islands, but then again, it is one of Europe's largest urban parks clocking in at an impressive 210 hectares of green space. The "animal garden" is a popular destination for all kinds of travellers from parents and kids headed to the zoo, to students looking for some extra space for a game of frisbee.

The park first appeared in the 16th century when the prince-electors of Brandenburg spent their days hunting game in what was once a rather wild land. In the 17th century the park's first paths appeared, along with the main road which cuts through the park on an east-west axis and is now called Strasse de 17. Juni. Eventually Friedrich the Great opened the gardens to the public. But it wasn't until the 1830s that the greens were transformed into the urban park that we know today though a project led by the landscape architect Peter Joseph Lenn?.

An entire day can seemingly fly by in an instant at the Tiergarden, where even an aimless meander can take you from a perfectly landscaped English-style gardens to tall grasses along the many creeks and canals where couples share a bottle of wine on a rickety bench.

Everything you could ever want from a park is here in the "Central Park of Berlin", and we've collected a few ideas below to get your started. 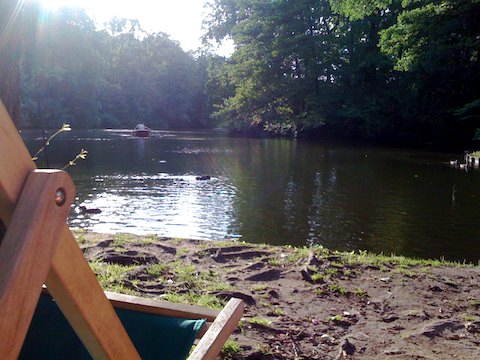 In the Tiergarten, all roads lead, quite literally, to the Siegess?ule or Victory Column - a 67 metre-high tower in the heart of the park. It stands in the centre of the Grosser Stern roundabout, from which five avenues emerge creating a star-like pattern and reaching out to all corners of Berlin.

A tower of granite, sandstone, and gold leaf, the Column is topped with a 8.3 metre-high bronze statue of Victoria designed by Friedrich Drake. Inaugurated in 1873, the Heinrich Strack-designed structure had its first home at what is now the Platz der Republik where it stood commemorating Prussian victories over Denmark, France, and Austria in the 19th century. In 1939, the Nazis relocated the Column to its current spot in the Tiergarten where it now thrives as a popular tourist destination. Electronic music lovers will also recognise the Victory Column as the backdrop for the legendary Love Parade techno festivals from 1996 - 2003 as well as in 2006.

The Victory Column is open for visitors daily. If you can handle the 270 steps, the view from observation deck is nothing less than breath-taking. Get to the column and its Cafe Victoria via underpass from the outer edges of the roundabout.

Note: The Victory Column is currently under renovation and is expected to be completed in May 2011.

The Zoologischer Garten is in the south-eastern corner of the Tiergarten, and along with its attached Aquarium, is home to nearly 14 000 animals. Unsurprisingly, it's a failsafe option for a day with the little ones.

A quick walk-by is all you'll get from the Schloss Bellevue, the grandiose neo-classical palace residence of the German President. Mere mortals like us aren't allowed anywhere near the place, but it's still worth a look if you find yourself nearby.

A restorative drink at this elegant cafe and beer garden is a must, if you can handle its rather high prices. Picnic tables and lounge chairs line the edge of the Neuen lake where a more mature crowd enjoys traditional German food, pizza, and tall glasses of frothy beer.

Easily accessible, relatively cheap, and colourfully decorated - Schlesenkrug is both a cafe indoors and a lively beer garden outside. Its location next to the gates of the zoo makes it a popular rest spot for families.

How to Get There

The Tiergarten is accessible from several U and S-bahn metro stations including Bundestag (U), Bellevue (S), Hansaplatz (U), Tiergarten (S), and Zoologischer Garten (U+S), which will drop you off at a number of points circling the edge of the park. However, the best bet for a quick and easy drop off at the Victory Column is bus number 100 which passes the Schloss Bellevue, Tiergarten Carilon, the Haus der Kulturen der Welt, German Chancellery, Reichstag, runs along Unter den Linden, and ends at Alexanderplatz. Picturesque and convenient to boot!