Berlin, quite conveniently for visitors, has much of its cultural attractions within a few blocks around Unter den Linden in the central Mitte district. Perhaps most convenient of all is Berlin's Museum Island, the northern portion of an island in the heart of the city along the river Spree. Since its first exhibition halls in the late 18th century and King Frederick William IV's declaration that the island be dedicated to "art and science", the island has grown into a mecca for culture vultures from across the world. In 1999, the complex was added to UNESCO's list of World Heritage Sites and with so many grand, historic buildings filled with priceless treasures, it's not hard to see why.

Pergamon Museum
The star of the museum complex is undoubtedly the Pergamon, which houses many reconstructed large-scale monuments including its namesake the Pergamon Altar. Here you'll find a fantastic antiquity collection, an Islamic art collection, and a Middle East collection. If you visit one museum in Berlin, make it this one.

Altes Museum
more info
The "Old Museum"'s grand Neo-Classical building, designed by Karl Friedrich Schinkel, holds one of the most imposing spots in the centre of the museumsinsel complex. Inside, you'll find an impressive collection of classical antiquities.

Neues Museum
more info
The "New Museum" is most famous for being the home of the world-renowned bust of Nefretiti, and it also holds an entire Egyptian and papyrus collection, a collection of pre-history and early history artifacts, and part of the collection of classical antiquities.

Alte Nationalgalerie
more info
Unlike the institutes listed above, the "Old National Gallery" is an art museum first and foremost. Its focus is on 19th century paintings and sculptures, and as such it is filled with works Classical, Romantic, and Impressionist masters.

Bode Museum
more info
Perched on the northern tip of the Museum Island, the Bode Museum's domed roof is instantly recognizable. Within this historic building is a vast sculpture collection and a collection of Byzantine art. 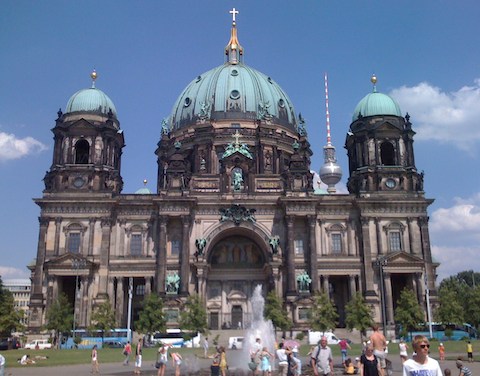 Berliner Dom
One of the few non-museums on the island is the Berliner Dom - the Berlin Cathedral. Beautiful from both the inside and the outside, its exterior is covered in dark patches caused by the damage it suffered since its construction in 1905 (itself a replacement of earlier churches on that spot).

Lustgarten
For such an exciting-sounding name, the Lustgarten ("Pleasure Garden") is a rather plain expanse of grass in the heart of the Museum Island. It does, however, have plenty of historic significance from its origins as a Palace garden to its development into a place for military parades, political demonstrations, and mass rallies, used most recently by Hitler who addressed up to a million people at the spot.

Stadtschloss
The Museum Island was also once home to the Baroque Berlin City Palace (Stadtschloss), a residence of the Hohenzollern royal family. After suffering severe damage through World War 2, the ruling GDR government demolished its remains in 1950. On its site was built the social-realist Palast der Republik (Palace of the Republic), which acted as the parliament house for the East German government. After reunification, the German government decided to demolish this building too. Since 2008 a vast empty plot of land, which you can now see across from the Lustgarten, lays waiting for the planned rebuilding of the Stadtschloss. Set to open no earlier than 2014, the rebuilt City Palace will retain its historic outer layer while its interior, which will house the Humboldt forum of culture, art, and science, will be modern.

All museums offer discounts to students, and many offer free entry on certain days, or at certain times of day (for a short while before closing for example). It's worth checking on the individual museums' websites for details to get the most for your euro. If you've splurged on a Berlin Welcome Card, you'll have a 25% discount at all of the island's museums.

Real culture vultures should investigate the 3-day Museum Pass, which will give you free access to roughly 60 museums across Berlin. The cost is 19 euro for adults and 9.50 for students and children, and the pass is available to purchase at any participating museum (including all of the museumsinsel museums).

How to Get There

Is this updated? Is it still free on Thursdays?