Over its long and turbulent history, Germany's cuisine has grown and transformed significantly, and it continues to do so even today. Each region in Germany can boast its own culinary history and traditional dishes, but there are a few staples of German food and drink that are universal across the country and particular favourites in Berlin. Here are a few of our favourite German dishes that even the most picky of eaters should taste in Berlin - and a few suggestions for where to try them.

If one thing can be called the essential German food, it's got to be the sausage. Wurst can be filled with pork, beef, or veal, or even with offal or blood, and is often served alongside sauerkraut and boiled potatoes or egg noodles (spatzle). Grilled or boiled, a bratwurst is one thing you must try while in Berlin - whether in a fancy restaurant or from a stall on the street.

Speaking of stalls, one of Berlin's most iconic street foods is of course the currywust - a sliced sausage topped with ketchup-curry sauce. The city now even has its own currywurst museum!

Also known as tarte flambee, flammekuche can be compared to a thin-crust pizza but it is actually more of a flat bread with toppings. An Alsatian dish to be precise, flammekuche comes in a variety of styles but the most classic topping is creme fraiche, onion, and bacon. Delicious! 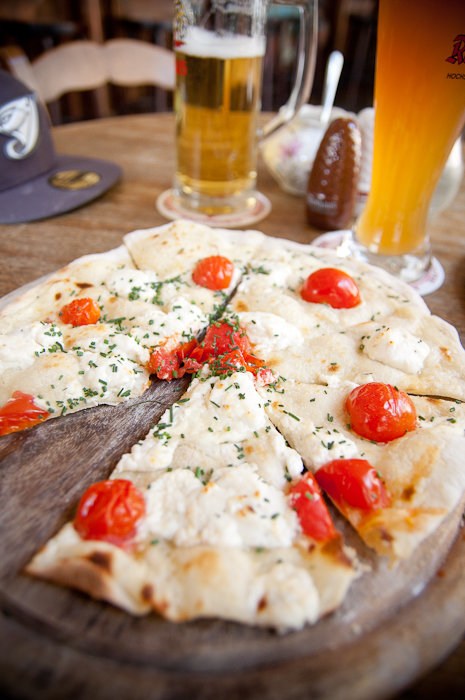 Beer and beer gardens is one thing Berlin, and Germans in general, are extremely good at. While pale pilsner-style beer is the most common, Berliners are known for their open-minded tastes and dark and ale beers are also popular. However, our own favourite is weissbier - wheat beer. This flavourful beer is most commonly cloudy in appearance (hefeweizen), but you can also try a kristallweizen where the yeast has been filtered out to create a more "kristall"-clear look.

With Berlin becoming an increasingly cosmopolitan city, you'll likely find it harder and harder to find traditional, German restaurants. But one fail-safe option for fantastic German grub are beer gardens, where the food is nearly as important as the beer itself.

For example, the Prater Beer Garden (which is also home to a more upmarket sit-down German restaurant) located in the Prenzlauer Berg district (Kastanienallee 7-9) serves up a variety of grilled wurst served wedged inside of a bread roll for just 3 euro.

Rogacki
Wilmersdorfer Strasse 145, Charlottenburg
More of a foodie shopping paradise than a restaurant, the Rogacki deli is the perfect place to stock up on ready-made German delicacies, particularly pickled, smoked, or fresh fish.

Borchardt
Franzosische Strasse 47, Mitte
This French-German restaurant is the top choice for those looking for a more refined take on German cuisine and many say its schnitzel is the best in town.