Paris has the Eiffel Tower, London has Big Ben, and Moscow has Red Square. But, in the heart of Berlin, it is the Brandenburg Gate that is undoubtedly the most potent and recognisable symbol of the upheavals of the 20th century. The massive structure speaks of war and peace, freedom and oppression, unity and divisions, and its message is still relevant in the western world today.
The architecture of the Greeks inspired the design of the gate, which was built in three years from 1788. Specifically, it was modelled on the entrance to the Parthenon in Athens, the birthplace of democracy; so it is fitting that Berlin's most famous landmark is also today a monument to that very cornerstone of modern politics. 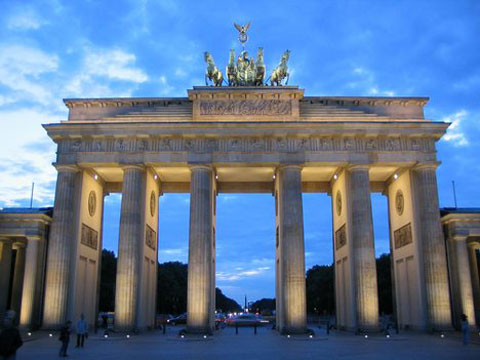 It was at the Brandenburg Gate that the Soviet Union cut off East and West Berliners from the rest of the world. It was here too that American presidents John F Kennedy and Ronald Regan both addressed West Berliners. It was here that Regan called on the then Secretary General of the USSR, Mikhail Gorbachev, to join with the west, with the words:
"If you seek peace, if seek prosperity for the Soviet Union and Eastern Europe, if you seek liberalisation, come here to this gate! Mr Gorbachev, open this gate!"
That was in the summer of 1987, and the Cold War was still being played out between two superpowers each in possession of a nuclear arsenal capable of laying waste to the planet and wiping out mankind. Two years later, on December 22, 1989, the USSR did just what Regan had demanded - the gate was re-opened, passage between east and west was restored, and demolition of the Berlin Wall had begun.
Among the first through the gate were West German Chancellor Helmut Kohl and East German Prime Minister Hans Modrow. Their meeting was symbolic, and the symbolism of the gate is still very much alive.
But what of the Brandenburg Gate itself? How did it come into being, and why did it become such an important landmark in Berlin?
It was commissioned by Kaiser Friedrich Wilhelm II, and responsibility for the design fell to Karl Gotthard Langhans who set to work in 1788. It was one of 18 routes into and out of Berlin, which were built into a new wall around the old city. It is worth considering the design and dimensions of the gate, to get some idea of Langhans' achievement. The monument stands 26 metres high (if you've ever seen a London bus, imagine two of them stacked one on top of the other). It is around 65 metres from one end to the other (that's five buses in old money), and 11 metres deep. The whole thing was built from sandstone, at what is now Pariser Platz, close to the Reichstag. Langhans' vision was of an Athenian-style entrance to the city, with five passages formed by 12 Doric columns. It was topped off by a sculpture called the Quadriga, created by Johann Gottfried Schadow.
It took just 15 years for the Brandenburg Gate to attain a political significance of international importance that went beyond its structural beauty. Napoleon stole the Quadriga (the Berliners later stole it back), and Adolf Hitler's Nazis adopted the gate as party symbol.
But nobody could have foreseen what would happen to the Brandenburg Gate after the war. Damaged though erect, it was renovated by East Berlin's new Soviet masters, and for some time remained a major crossing point between east and west, right on the border between the Soviet and British sectors of Berlin. But tensions in both sides of the city were rising, and when work began on the Berlin Wall in August 1961, there were demonstrations as West Berliners gathered at the famous gate. That was all the Soviet authorities needed - and they seized upon it as an opportunity to shut the crossing. Nobody would pass through the Brandenburg Gate in either direction without permission until 1989. Those who tried to pass from east to west, either at the gate or anywhere else along the Berlin Wall, risked being shot dead on the spot.
And what of the Brandenburg Gate today, in this post-wall European capital? Well, a trip there will prove that it is a powerful draw for visitors to the city - just watch the vast numbers of tourists that pass down Unter den Linden or Strasse des 17 Juni to marvel at the architecture and contemplate all that the gate symbolises. Actually walking through the gate can, for some, be an almost religious experience, so strong are its associations.
For Berliners, it is a beloved symbol of their city, their history, their freedoms... and the battles they won, the skirmishes they lost, in the struggle for all of this. Kaiser Friedrich Wilhelm II ordered the Brandenburg Gate to be built, more than 200 years ago, he wanted it to stand as a monument to and architectural representation of peace. How delighted he would be that it survived generations of war and political scrapping, and remains just such a monument today.