When work began on this church in 1847, Zakopane was really no more than a hamlet - an unknown place in the wilderness. St. Clement's was her first parish church, and until then, wayside shines were the most commonplace expressions of religous art. These were reputedly built by the outlaws who had settled in the region, as a penance for their sins.

St. Clement's began as a very modest enterprise, but it was enlarged in 1850-1, under the supervision of the first parish priest, Jozef Stolarczyk, a stout fellow, who was also a keen mountaineer. His was not the easiest of jobs, and matters that would have seemed scandalous in Cracow had to be taken with good grace in this little known den in the wilds. 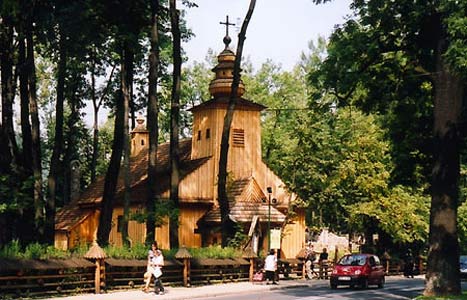 'Canon Stolarczyk assumed his duties among a pagan flock,' recounted the artist, Wojciech Kossak. 'During the Mass, the gazda and juhas shepherds would come into church to light their pipes from the altar lamp in front of the Holy picture of Our Lady. They would have their hats on, as if they were entering an inn. But they did not mean to be disrespectful at all. Neither Kosciuszko nor prince Jozef Poniatowski, (whom they had never heard of), were among their national heroes - but instead the highwayman Janosik, who had been executed at Orawa castle.'

On one occasion, a local gorale politely asked whether he might marry two women, as he loved them both. The priest replied that perhaps he might marry one first, and see how he was getting on six months later. Time passed, and then one day the priest bumped into the highlander again. The reverend inquired as to whether the man still wanted to marry the second girl. 'Never' the gorale replied, 'one wife is enough for both me and my brother.'

The building itself is a wonderful place, rich in idiosyncracies and charm. Much of the interior was sculpted by a local, self-taught artist, named Wojciech Wawrzyncok. He created the striking altarpiece, as well as the two smaller ones that flank it on either side.

A great deal of the church may have been created by home-grown talent, yet the harmony of its design is faultless. The sense of focus is perfect, with a flowing rhythm that sweeps down the church to the altar-piece, the fountain of God's grace. Even the design of the benchs accentuates this movement, as does the rippling symmetry of the three classically inspired altar-pieces.

Skill can also be found in the details. There is a fine collection of small paintings on glass, which are typical of the region. These represent the twelve stations of the cross, and are painted in a child-like, dreamy way. Blues, oranges and whites dominate, with angels rendered like butterflys.

Another typical foible of the Highland churches are clocks, and there is an elegant old wooden one from the turn of the century on the western wall. It's calm ticking noise creates a very pleasant ambiance.

Outside, and inextricable from the experience of the church itself, is the unique Old Graveyard. This is a very special place and notably undepressing.

Visiting Zakopane next week with our church. My grandmother, Agatha Gawlak Nozynski, was baptized in St. Clement's. Anxiously awaiting our visit to the church and graveyard. Hoping to find my great-parents burial sites. .

I got married there on July 11,1964.Most beatiful and peacefull church.

Looks lovely. I love wooden churches. Not so many in my part of the States!