Giewont is by far the the most distinctive of the Tatra peaks, and it has been revered by the Highlanders since time immemorial. It's silhouette has long been likened to that of a Sleeping Knight, with his plumed helmet curling away at the westernmost extent.

'Giewont is the real king of the area,' wrote Maria Stecszkowska in 1858, ' it seems the highest, the best of all the fells... the inhabitants of Zakopane call Giewont their father, and they hold it in a special kind of respect. Its ridge serves them as a sundial; and when the sun rises over it, it is exactly midday.' 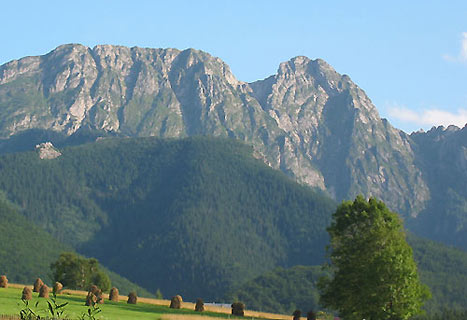 On top of the mountain is a famous old cross that was erected by the Highlanders one hundred years ago. Its construction was no mean feat, as this tall monument is built of jointed steel. As any hiker will tell you, the last stretch of the mountain is very hazardous, and today there are special chained paths to help you get to the top. The cross reads 'To Jesus Christ, from the Highlanders of Zakopane. 1900.'

The mountain has been popular with tourists for decades, and it is especially so in the Spring and Summer months. There are several ways to access it, and you can in fact walk straight there from the town. At the end of Kasprusie street, you can follow the red trail through the Strazyska valley. It is about a three hour hike all in all, culminating in a difficult rocky stretch at the end.

Alternatively you could take the cable-car from Kuznice to Mount Kasprowy Wierch. From there you can follow a red trail over the peaks of Kopa Kondracka all the way to Giewont itself. This is a big hike, involving some ten hours or so.

A final route to the Sleeping Knight takes you through the Malej Waki (the Little Valley), which many find to be the most beautiful of the Tatra valleys.

The legend that the knight will rise from his sleep if the nation is in dire need has been disproved by Poland's stormy history. However, other local heros, such as Pope John Paul II - who is reputed to have skied every peak in the range - have assumed the mantle of the Christian knight, on a quest to improve the lot of their people.

'I thank God for the people who took that cross to the peak of the mountain,' he declared, after a mass at the foot of Giewont in 1997. ' That cross looks out on the whole of Poland, from the Tatras to the Baltic coast. That cross speaks to us saying, 'Lift up your hearts!' I pray that all of Poland will look toward that cross and hear that invitation. 'Let us lift up our hearts!'

And now, sadly, it has claimed several lives, after the horrific thunderstorm where the lightning struk it's cross .

It's very sad, alot of people were injured or killed, and it's supposedly the worst lightning strike/storm since the 30's or something but it's definitely not the first time Giewont has 'claimed' lives. There have been many deaths here because of the huge crowds of people Giewont attracts and so just statistically due to the high number of people, there are relatively more deaths. Almost every mountain in the Tatras has had people die on them. People need to respect them more.

I went there it was very good.

I am going to Zakopane for the first time in a long time. Can't wait to see Giewont again. Any advice on a good Guide book for the tourist routes for hiking. Ta ksiazka tez moze byc po Polsku.

I should climb this mountain someday......

A marvellous description of a very special part of the world.

Just back in the states after a wonderful Poland vacation. Spent a day in Zakopane, fell in love with your country and your people. God Bless Poland.

I live in Zakopane. But unfortunately I've never been to the Giewont :( . But in this year I want go there. :) . Your Yap (I learn English)

There is no words for Poland and specially for Zakopane! Totally love it there! First time I went up to the Giewont, I was 6 years old with my parents and sisters and have been up there 2 times after that! The nature, the air everything about it is indescribable! My biggest wish since I was a little kid is to have a house in zakopane and a view at Giewont, the mountains!!!! Fantastic!

I have just visited Zakopane for the first time.... And I must say how impressed I was, I must stay I was a bit sick of eating PIZZA AND DUMPLINGS, but that was purely to us being veggies. The Mountain range are wonderful and I can say we be going back again that's a deffo. G/mountains and a over all great place to see. The only down fall is get to the place. 2-4 hour bus trip or longer by Train. But a fantastic enjoyment

Can't wait to get to the mountains. Zakopane here we come!

My maiden name is Giewont. I hope to be able to visit some day.

MY PSRENTS ARE GOING THERE TODAY. SO LUCKY. I MISS IT LOVE

That's cool about the Sleeping Knight

I love Zakopane and Giewont. I get engage in Giewont. My honeymoon will be there.

I love Polska. In 3 days i'm in Giewont-Zakopane. The 2nd best place in World is Polska.

The valley you call Malej Waki is in fact called Dolina Malej Laki (spelled with slash over the two last l's and a tail under the last a). It means Valley of the Little Meadow. Also, you do not mention the most popular way up that leads from Kuznice via Kondratowa Valley.

I love this place and im gonna remember for ever !! I miss Zakopane !!

I live in USA now, but my heart is still there, in Zakopane, we used to go to Zakopane every summer and stayed with a family of the name Madras, it has been over 35 years ago. I can still remember the fresh smell of that perfectly clean house, the morning walks to the mountains and evening returns, these great memories will lstay with me for the rest of my days I LOVE YOu MY COUNTRY E.C.

I Love You & I miss You Zakopane,