When Poles speak about the Poznan June (Poznanski Czerwiec), they're not commenting on the pleasant weather that summer in Poznan brings. Rather, it is June 1956 that stands in the memory of Poles, particularly in the city of Poznan, as it took centre stage that month over fifty years ago. Also called the Poznan 1956 protests or Poznan 1956 uprising, the Poznan June was the first protest against the Soviet-imposed communist government that was established after the end of World War II, thanks to Poland's (and most of Central and Eastern Europe's) bad draw at Yalta. 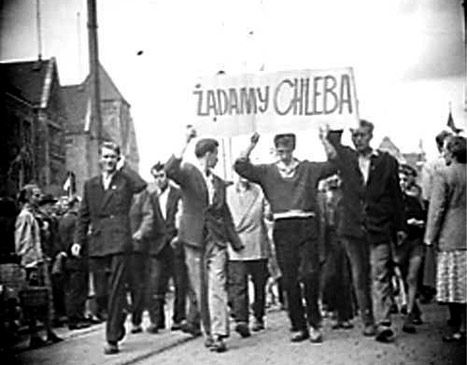 Above: "Zadamy chleba" ("We demand bread") was one of the popular slogans of the protest.

On June 28, 1956, workers began demonstrations at Poznan's Cegielski Factories, demanding better conditions and pay and protesting a recent rise in taxes and higher work quotas. The workers took to the streets, and were soon joined by workers from other factories, students, and intellectuals, resulting in over 100,000 people gathering at the Imperial Castle in Poznan, where city officials and the UB police had their headquarters. Among the demands were lower food prices (as seen above), wage increases, and revocation of recent laws that had worsened conditions for workers.

However, a peaceful protest soon turned violent, as the crowd took over the prison, freeing political prisoners and seizing firearms for the demonstration, as well as ransacking the Communist Party Headquarters and the secret police building, which resulted in the first shots being fired into the crowd. But it wasn't until the Soviet forces arrived that a real crack-down began. Tanks, armoured cars, field guns and lorries full of troops surrounded the city and began to take detainees for often brutal interrogations, which would leave 746 people detained until August. In the city, fighting began on the streets between the armed protesters and the Soviet forces.

In the end, the rebellion was brutally crushed, with estimated casualties being between 57 and 100 dead and 500 to 600 wounded. However, the protest led the way towards real changes the following October, including wage raises and other reforms that signified an era of post-Stalinist thaw. The Poznan 1956 protests are considered to be one of the first events that precipitated the fall of communism in Poland. Today, a monument stands in the Adam Mickiewicz Square commemorating the events in Poznan in 1956.

This was very helpful. I am liking the cold war very much and this website help me be gooder at my learning. 10/10 would bang A+++ ;) raunchy

gooder? Your English learning is clearly not coming along so well

Thanks for that. Definitely something to ponder seeing the pristine town of today... How things have changed,