If the word 'theatre' calls to mind two hours of sitting on an uncomfortable chair watching costumed lovies mince around on stage uttering gibberish like "How now, a rat? Dead, for a ducat, dead!", then maybe it's time you made a beeline for the Malta International Theatre Festival in Poznan.

The very joy of this festival is that hardly any of the action takes place inside an actual theatre at all. In fact the event was established back in 1991 to support and showcase the work of so-called 'off-theatres', which eschew traditional trends, pursuing drama in the broadest sense in the broadest of environs - usually outside. For example in 2006, the Malta Theatre Festival saw Project Bandaloop from the USA performing choreographed stunts and dance moves on the face of the Novotel Hotel. The same year also witnessed X-times People Chair hi-jack innocent old people and stick them high-up on mounted chairs from where they were asked to act out everyday tasks. A far cry from Shakespeare! 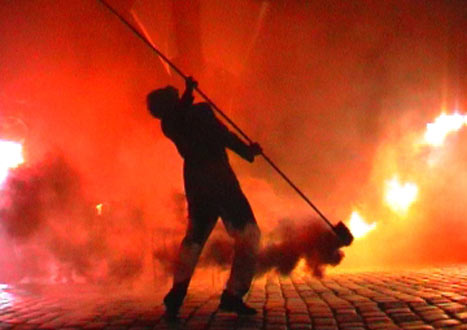 The Malta Festival traditionally takes place at the beginning of July and lasts just over a week. During this time no courtyard, street, square, public monument or indeed any public space is safe as up to 150 shows, drawing an impressive 150,000 spectators, take place in the city. Special performances too take place in the beautiful environment of Malta Lake. To the residents of Poznan it certainly seems that the World is a stage come summer!

If you're one of those people who still think theatre is boring then you should definitely come to Poznan to check out this festival. Due to the high reliance on visual aspects and the spectacular - as well as to the international nature of the event - the majority of the performances will be accessible to people of all languages. This is drama as it should be!

For full information on the calendar for each year's festival, please visit our events calendar or the festival's official page.

Hi. could you please tell me whan will the deadline for sending my Information and my DVD ?

hello, I work in one of the georgian Theatre wich calls "Kutaisi Lado Meskhishvili State drama Theatre" i want to know how we can perform on the fastival, and what is the tearms. plese write me on mail. waitting your answer.

To all you guys asking if you can perform on the festival, just have look at it's official website. http://www.malta-festival.pl/ There is English language available as well :)

Can't wait for the 2008 edition, just a few days left! Elvis Costello as the closer - sweet!

Hi, does anyone know how to get tickets to individual concerts? Specifically to Beirut on the 28th of June? Are the concerts free?