Wladyslaw Hasior (1928-1999) was one of the foremost Polish artists of the postwar era, and he maintained strong bonds with the Podhale region throughout his life. He also organized the thoroughly unzany Museum of the Zakopane Style in the Willa Koliba, which again is well worth a look.

This museum is the perfect introduction to Hasior's galaxy - and a tremendously inspiring one it is too. Even if this kind of thing is not normally your cup of tea, it's well worth dropping by, and expressions such as 'wheat from the chaff', and 'sheep from the lambs', instantly spring to mind. It's a marvelous place! 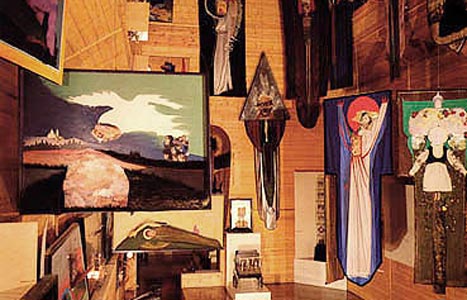 The exhibition was developed by Hasior himself whilst he lived in the town, and it is located in a former sanatorium on Jagiellonska street, a short stroll east of the centre. The slightly strange building is a perfect compliment to the art on display. The tall, pine interior is reminiscent of a church, or perhaps even the Great Hall of a medieval nobleman. This is heightened by the magnificent banners - for which Hasior was famed - that flow down from the ceiling.

Retro ambient music emanates from the speakers as you wander around, making you feel very much like you've entered an episode of Dr. Who. This then gives way to siren-like choral music, at times magical, at times unsettling, which is very much in keeping with the nature of Hasior's work. At some point on your visit you should encounter a fish with bird's wings soaring above an Amazonian jungle.

Hasior used all kinds of materials in his art, from old clocks, to magazine cuttings, to African textiles and childrens toys - really everything under the sun. The juxtaposition of different materials creates a fantastical effect. His world is very much like that of children's fiction, by turns enchanting and grotesque. And like children's tales, thoughtful messages can sometimes be communicated in a playful way.

Spent a week in Zakopane in 2011 and visited the Hasior Gallery.Firstly a lovely wooden building tucked in among trees, worth seeing on its own. Had to knock on door to be admitted. Once inside I had the place to myself as I wandered about. Had easily an hour of fantasy, took some photos and would have liked to have purchased the book of Hasiors works, but alas had limited space in my travel bag. If the gallery makes the book available on line I would like to purchase a copy. Highly recommended even if you are not arty. Do not miss this if you are in Zakopane, even if you have limited time.

I went to Hasior Gallery yesterday. When I entered it, I was overwhelmed by the spectacular banners hanging down from high ceiling. The whole gallery was so interesting and somehow spooky. I felt like all his works were expressing a deep sadness and emptiness. Almost cried. It was worth to visit if you are in Zakopane. And be prepared to enter Hasior's world.

I have some family living in the Chicago area

I have ancestors in Zakopane. I am planning to visit next year. Does anyone know the last name Skwarek" who had distant relatives in Chicago, Illinois,USA. My grandfathers name was Albert Skwarek...Thank You

Visited a couple weeks ago. One of the highlights of the holiday(which included walking in the High Tatras - spectacular). Unfortunately, only got in 1/2 hour before closing on our last day. Would seriouly consider coming back here for the weekend just to spend the day in this wonderful place. Wonder what hearing that eerie music all day does to your state of mind!

This artist is the best of postwar polish painters. His works are horrifing and amazing. I was in Zakopane last week and when I saw his works I was realy scared. If you want to see realy good and also terrifing works go to Zakopane to his gallery. It might be dificult to find this muzeum, and it's not famous among polish tourists but it's worth to see it.

I am very interested in the history and life of the artist. My father was named after him and I feel my ancestors once lived in the area before heading to Ellis Island. If anyone knows anything about Eugene Hasior whose family lived in the area, please contact me. Eugene arrived in America in 1905 on the ship America. He named his son Walter after the artist. If you know of any of my relative please email me at the above address. Eugene was my grandfather who Married Anna Laskowski.