'Sir, could you tell me why you've packed an electric drill in your bag?'

"Errr, I'm a musician in a vegetable orchestra and I need it to turn a carrot into a flute...."

It's not the most convincing of replies, and given that the Vienna Vegetable Orchestra looks a tad more rock 'n' roll than preened classical pianist, the musicians don't take their own drills on tour. Nor do they take vegetables for that matter. Because freshness is foremost when you're about to jam on a cucumber.

An hour before a concert kicks off, the musicians hit the nearest food market, where they scour the stalls for the finest fodder. As the audience gathers, the orchestra is frantically fine-tuning its instruments backstage. Carrot shreds fly through the air - there is panic as a pumpkin squashes. But it's OK, backups have been bought. There's no time to dilly-dally now though - the lights are up and the concert must begin.... 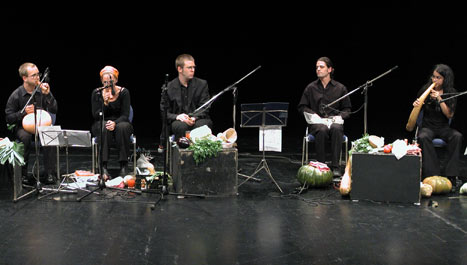 Actors have nightmares that they must go on stage without having learnt their lines. And for classical musicians, surely the most dastardly dream would involve being forced to play Beethoven on a beetroot.

Yet for the Vienna Vegetable Orchestra, Mother Nature's marvels are the keys to a magical musical galaxy. The veggie odyssey has lasted ten years now. They have toured Europe and Asia, and they already have a couple of albums in the can. With all this in mind, we thought it was about time to celebrate the glory that is the Vienna Vegetable Orchestra.

Vienna Life had the great pleasure to hook up with Nikolaus Gansterer - co-founder of the orchestra - and ask him a few questions on the 10th anniversary of the ensemble. When he's not composing vegetable medleys, he's a successful contemporary artist who's taken shows around the globe.

"The project is still in a permanent state of development," he enthuses. "At the moment, we are working on a new program and our third album, which will deal with the complex relationship between nature, mankind and culture."

On this new voyage, advanced video links and micro cameras will be deployed to make gigs an all-enveloping experience. The Vegetable Orchestra has already experimented with video art, and Nikolaus is effusive about the vibrant audiovisual scene in Vienna. Of course, there's only one crew that rocks it with radishes, but music, art and performance are being blended in bold ways by clusters of artists across the city.

For the uninitiated, the diversity of sounds that can be created from a vegetable patch is astonishing to the point of being uncanny. The orchestra doesn't attempt to play hummable tunes as such. Instead, they sail on abstract sonic journeys.

There are eleven members of the ensemble, and typical instruments include carrot flutes, cucumberphones, pepper trumpets, leek violins and celeriac bongos. Aubergines, cabbages, lettuce leaves and dried beans also make regular appearances. You might wonder what happens to all the discarded veg at the end of the day. Well, when the performance is over, the audience is treated to a bowl of bubbling vegetable soup.

Vienna Life was curious about which was the most inspirational vegetable to play on. After all, with ten years of experimenting under their belts, surely no one in the world knows better than the vegetable orchestra.

"I would say that really depends on your musical, as well as technical skills." Nikolaus muses. "But basically, carrots are rather flexible and versatile vegetables. For low frequency sounds, special sorts of pumpkins offer a wide range of bass instruments, whereas in the search for high frequencies, the skins of leeks are very usable. Each vegetable offers another range of acoustic potential."

Given that Vienna is such a sweet-toothed city, one wonders whether they shouldn't really be taking up more sugary instruments: cocoa beans, fruit jellies, marzipan, vats of creams - could those herald a new horizon...? Or are there still exotic vegetables from faraway lands that fire the imagination of the Viennese pioneers?

"Sure, there are plants growing out there we haven't played on yet, " Nikolaus ponders. "Think of the rapidly diminishing biomass of rainforest or the new promises of life science. And that makes the future of vegetable music challenging and unpredictable, as we are playing on living and growing species.... After ten years we are still busy exploring the rich and intricate universe of vegetable music..."

Watch the Vienna Vegetable Orchestra play on their homepage