What are these fabled White Nights that you keep hearing so much about anyway? It seems that no self-respecting guidebook can mention the word St. Petersburg without referring to these incandescent evenings in the same sentence. Well the answer is simple, as any astronomer or resident of Oslo, Stockholm and Helsinki will tell you. During the Northern hemisphere's summer, the North pole is tipped towards the sun, owing to the fact that the Earth revolves on a tilted axis. Hence from May-July, in cities with a particularly Northerly latitude, the sun never dips far beneath the horizon even at night. So, despite the fact that Apollo and his chariot have submerged into the underworld, they haven't gone very far, and his immortal glow never quite leaves the sky... In fact before you know it he's popped back up and it's day all over again! 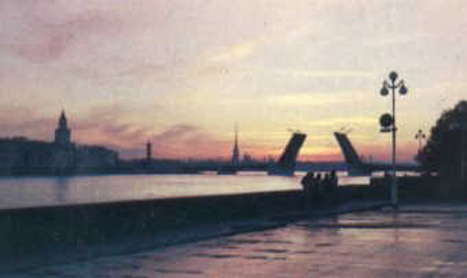 This celebrated phenomenon of the White Nights is a source of much pleasure for St. Petersburgers, who, let's face it, get a bit of a rough ride in winter. During the eternal twilight of these summer evenings, it is customary for the city's citizens to stay up all night doing nothing in particular. It is commonplace to see romantic couples strolling by the River Neva, admiring the milky reflection of the sky in its glassy waters, and even more commonplace to see more hedonistic revellers walking the streets, beer in hand, celebrating the simple joy of being alive.

Of course as Confucius (or someone similarly sage-like) once said: 'Where there is Ying there is Yang'. During the winter St. Petersburg experiences the flipside of its Northern latitude - enduring what are commonly referred to as the 'Polar' or 'Black Nights'. The exact opposite of the White Nights, for much of winter the sun creeps lacklustrely above the horizon, carves a small and pathetic arc across the sky before plummetting out of sight again for the next eighteen hours or so... Which can get pretty depressing after a while!

Never mind, we at St. Petersburg Life have learned to put a brave face on it. After all, the longer the night the more excuse to spend all your time in bars and clubs! Or alternatively why not pop over to Tallinn for their Black Nights Film Festival?

I am enthralled by the premise of places of extremes., thus find St. Petersburgh, an exciting place, year round.

Hi, we have just posted an article about the st. petersburg white nights on our UK travel blog. white Nights in St Petersburg

Such a wonderful time of the year there. It also makes it better for the people in the "city that never sleeps"!!

the white nights are simply spectacular! I was here in May not so long ago and it was still daylight at 11pm and never really got dark. Just gives you a strange sense of euphoria to be wandering around the city at 2am in the light