Sofia may seem like a modern capital these days, full of important men in suits bustling around and skyscrapers going up all the time, but visit any of its ancient cathedrals or mosque and you'll see the city's wrinkles beneath its layers of make-up. Sofia, along with all of Bulgaria, has survived numerous raids, wars, and occupations, and its wounds, though hidden well these days, remain deep nevertheless. While young Bulgarians enjoy the successes of the free market and feel optimistic about Bulgaria's entry into the EU, ask any of the older generation about Bulgaria's history and you'll see ancient grudges still held, and realize why so many modern conflicts seem like deja vu to Bulgarians. 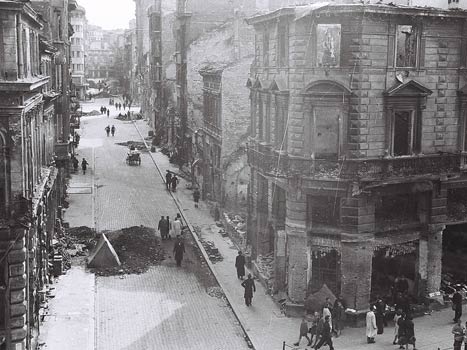 Above: Sofia's definitely seen worse times; after being bombed during WWII in 1944

The name of the then-small settlement of Sofia arose from the Church of St. Sophia in the 6th century. Originally named Serdica (sometimes "Sardica"), the area was first settled by the Serdi Thracian tribe tens of thousands of years ago. From around 500 BC on, several other tribes occupied the area, until the 4th century BC when Alexander the Great and his armies occupied the city for a short time. In the 1st century AD, Sofia was conquered by the Romans and became an administrative centre of the region. Under Roman rule, the city expanded and fortification and protective walls arose, along with turrets, public baths, a basilica and an amphitheatre, and many public and government buildings.

Along with the expansion of its buildings, the population of Sofia (then Serdica) expanded as well, and became an important administrative and trade centre for the whole Balkans. Once Christianity came to dominate the Roman order, it became an important city of the Byzantine Empire. In 447 the Huns came to rain on the Romans' parade, but after Sofia's destruction in that year, it was soon rebuilt by Byzantine Emperor Justinian and renamed Triaditsa, and remained under Byzantine dominion until 809 despite frequent raids and destruction by the Slavs and other tribes.

In 809, Sofia, now known by the Slavic name Sredets, became the centre of the First Bulgarian Empire. The Bulgarian and Byzantine Empires would play a game of tug of war with the city over the next few centuries, as the city fell under Byzantine rule again in 1018, then after a Magyar raid was reclaimed by the Bulgarians in 1128. In 1376 the city was renamed Sofia once and for all, during which time it was a thriving trade centre in the region, known for its gold goods and other crafts.

The year 1382 determined a large part of Sofia's history and created scars that are still healing today in some ways. That year, the Ottoman Empire conquered the city and most of the surrounding regions, and a period of violence, persecution, and crusades began that would last into the modern era. At the beginning of the 15th century, Ottoman Turks began to settle the predominately Bulgarian city, and many of Sofia's citizens, particularly the elite classes, were persecuted. However, the period was also one of growth, with many Ottoman buildings emerging, though today the only surviving mosque is Banya Bashi. The Muslim population arose among the Bulgarian and small Jewish population, and although there was obvious animosity between the groups, nevertheless trade and ordinary life persisted and the city grew exponentially.

In 1878, the Russian army liberated Sofia and Bulgaria from the Ottoman Empire during the Russo-Turkish War of 1877-78. While this seems like ancient history to us today, many Bulgarians still view Russia in a sympathetic light, though the atrocities committed later by the Russian Communists would easily match the violence and terror of Ottoman rule. Once again a free city, Sofia became the capital of the autonomous Principality of Bulgaria in 1879, later the Kingdom of Bulgaria in 1908. Perhaps the darkest chapter in Sofia's history came during its independence, however, during the St. Nedelya Church assault of 16 April 1925; 150 people were killed and over 500 injured when the Bulgarian Communist Party blew up the roof of the St. Nedelya Church, in an effort to weaken the Bulgarian authorities so a communist revolution could take place in Bulgaria, like in Russia.

However, many more years and several great wars stood between Bulgaria and communist rule. First, the Balkan Wars of 1912-1913 joined Bulgaria with Montenegro, Greece, and Serbia to conquer Ottoman-held Macedonia, Albania and most of Thrace. Though the war brought victory for Bulgaria, it also resulted in heavy casualties and later fighting over the won territories between the allies, though that was soon overshadowed by the greater disturbance of World War I. After the Balkan Wars, Bulgaria was left with bitter feelings for Russia and Western powers, and aligned itself with the Austro-Hungarian Empire and Prussia against Serbia, and thus Britain, France, and Italy. During World War I many Bulgarians in Sofia suffered economic hardships and unrest, and the war soon became unpopular. Then, the Russian Revolution of February 1917 had a deep effect in the city, with anti-monarchist and antiwar sentiments growing, eventually leading to the previously-mentioned massacre.

When 1918 brought the end of WWI, Bulgaria lost much of its territory but revolution was more or less quelled in Sofia. Elections in March 1920 were the beginning of Bulgaria's first genuinely democratic government, though there was still much animosity against the Bulgarian Communists from the government, and the Party was banned. But the interwar period saw much economic depression in Sofia and Bulgaria, even though other newly-free republics like Poland and Hungary were prospering. This unrest led to a coup and an autocratic dictatorship replacing Bulgaria's previous democracy, and aligning it with Nazi Germany and Fascist Italy just in time for World War II.

When war broke out once again, the government of the Kingdom of Bulgaria declared an official position of neutrality, though with an eye on territorial gains. But in 1941, Bulgaria was forced to join the Axis powers when German troops insisted on passing through Bulgarian territory. Much of the consequences of joining the Axis forces affected Sofia the most, as it led to the city being heavily bombed by Allied aircraft in late 1943 and early 1944. Bulgaria's ruling regime was thus overthrown, and Sofia became capital of the Communist-ruled People's Republic of Bulgaria which would last 45 years.

Communist rule in Bulgaria was much like Communist rule in the rest of the Soviet-controlled Eastern Bloc, with shortages, censorship, and terror being the norm. Its most important figure was probably Todor Zhivkov, who ruled the country for 33 years and remained extremely loyal to the Soviets throughout his rule. In addition to the Orthodox Church facing persecution, Sofia's small Turkish minority was also strongly persecuted during the Communist era.

Compared to the riots in Gdansk or Prague that brought about the end of Communism in their respective countries, the revolution in Sofia was much calmer and natural. In November 1989, some demonstrations on ecological issues in the city were broadened into a general campaign for political reform. Soon, Zhivkov was deposed by the Party itself, and in early 1990 the Bulgarian Communist Party gave up its absolute hold on power, allowing the first free elections since 1931 to be held in June 1990.

Since the end of Communism in Bulgaria, Sofia has undergone a major face lift, cumulating with Bulgaria's entry into the EU on 1 January 2007, a momentous step for the city and the country. Of course, the road is still not easy for the city, as Bulgaria is still one of the poorest EU countries, and while Sofia may be looking better and more polished on the outside every day, beneath the surface lurk many problems, many inevitably the result of its long and turbulent history.

This was very informative. I was curious how the city got its name and my questions were answered. Some really great musical instruments come from this country and I wanted to learn more about the area. Thank you!