If you find yourself in London visiting family over the holidays, or simply enjoying the sights at some point in December, you’ll be delighted to know that not only does London do Christmas spectacularly well, but you won’t need to fight off frostbite while enjoying the attractions. Even in winter, London’s weather is accommodatingly mild, and full-on winter gear is rarely a necessity.

Over the holiday season, nearly the entire city of London is covered in festive lights and decorations. At the heart of it all is a giant pine tree on Trafalgar Square – an annual gift from the city of Oslo since 1947.

One of the biggest events leading up to the big day is the switching on of the Christmas lights on Oxford Street, the city’s busiest shopping area. In fact, most of the West End is festively lit up throughout most of November and December, including Covent Garden and Regent Street. It’s all a welcome distraction from the more tedious shopping tasks at hand!

What London may lack in snow, it certainly makes up for with festive Christmas markets, the largest of which is the Winter Wonderland at Hyde Park. This spectacular holiday fair is more than just a shopping destination - although it’s a fine one of those as well! Apart from the stalls of hot food and unique wares, Winter Wonderland also offers ice skating, a giant Ferris wheel, and several fun rides from carousels to roller coasters. Best of all, entry is free! 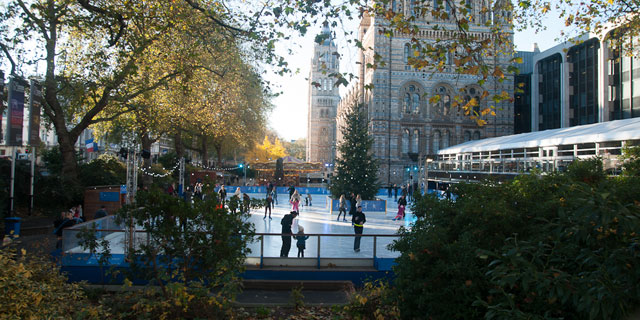 Hyde Park isn’t the only spot in London for ice skating. London boasts some truly stunning, picturesque rinks, including one at Hampton Court Palace, in front of the stunning Somerset House on the Strand, next to the London Eye (the rink is called the London Eyeskate!), along the Tower of London, as well as along the imposing Victorian building that is the Natural History museum. Other rinks can be found at Broadgate, Canary Wharf, and at both of London’s Westfield shopping centres.

For some indoor entertainment, look no further than London’s huge array of theatres. This time of year is traditionally the time for pantomimes in Britain, a family-friendly interactive show filled with costumes and sing-a-longs. Plenty of theatres across the city put on some sort of panto around Christmastime, but there are also lots to choose from for a more grown-up experience. Ballet and opera are also a popular draw this time of year, and you can be sure that the Royal Ballet will be performing their own adaptation of the classic Tchaikovsky Christmas ballet The Nutcracker at the Royal Opera House in Covent Garden.

As for finishing off the year with a bang, the best way to bid farewell to the holidays is at the New Year’s Eve celebrations held every year along the Thames. An incredible fireworks display is set off by the London Eye at midnight, so the best place to catch a good view is along the northern bank – but arrive early, the best viewing spots fill up quickly!

Café de Paris provides live entertainment unparalleled in the London nightlife scene. World renowned acts like circus performers frequent the programs on this venue to bring the utmost fun and excitement in your night out.

please anyone with good shit or can hook me up. i will be spending Christmas here