The village of Chocholow lies seventeen kilometres east of Zakopane, and it represents the most complete survival of an old gorale village. The majority of the houses here were built during the nineteenth century, and it was from buildings such as these that Witkiewicz took his inspiration for the 'Zakopane Style'.

Chocholow is based around one main street, and its wooden houses mirror each other on either side. Virtually every building echoes the next, the curious anomaly being the stone gothic church, (the old wooden one was replaced in the mid-nineteenth century). 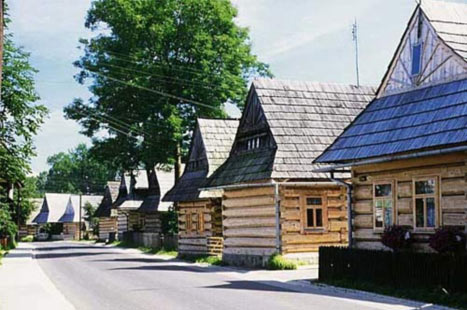 Besides its architecture, the village is also famous for its role in the doomed Uprising of 1846 (against the Austrians). This came two decades before the liberalizing of Habsburg policy, and a small museum at number 75 chronicles this romanticized episode in the village's history.

At number 28 you will find the workshop of a talented local sculptor. He is renowned for his skill with wood, and he also sports a rather magnificent walrus moustache. His studio is packed to the brim with devotional works, as well as portraits of highland characters. The house itself, both inside and out, is an enchanting example of Podhale style, with some beautiful old furniture.

On summer afternoons you are likely to meet plenty of hikers in Chocholow, and there are modest guesthouses too. However, this doesn't alter the fact that this a very folkloric place. And if you come here outside of the peak season, there are moments when you feel that you have been transported back to a different age.

It's well worth having a good potter around behind the main street, and the chunky wooden houses seem very much redolent of a Hansel and Gretel world. One house in particular, no. 24, is known as the 'house from one tree' , and it is said that the entire building was constructed from one mighty pine. In fact with each step you take from the main road, the further away the modern world seems. Haughty looking cockerels potter about, and old ladies in patterned headsquares emerge from the doorways carrying ladles of milk and buckets of grain. At these moments you can imagine what it must have been like to explore the region one hundred years ago.

M father was born in Chochlow in 1915 staying with at the house of his grandmother named Langer. Any information on the Langer family would be welcome!

Went to Poland last year stopped by the wooden village Poland. Saw a statue we really want but didn’t have the money then. Can we order on line cant find a web page for the shop

I like the review, but I have little correction. Chochołów is not East of Zacopane. It is North west.

Hi, love your review. wil it be possible for me to get more information from you on how to get from zakopane to chocholow and from chocholow to krakow by public transport? thanks!

hello I wos in the Poland last year 2009 I love Chocholow and Iam from village Maruszyna I enyoed the wooden houesess,after 23yrs I want crazy I brake with the tears Poland my country is so beautiful.Iam living in the usa eance 1985 ,but I still miss my Poland

hello I wos in the Poland last year 2009 I love Chocholow and Iam from village Maruszyna I enyoed the wooden houesess,after 23yrs I want crazy I brake with the tears Poland my country is so beautiful.Iam living in the usa eance 1985 ,but I still miss my Poland

My family, friends and I have been to both Zakopane and Chocholow a number of times over the past 5 years. My family loves this area of Poland and plan to visit again in the Spring of 2009. The Polish people are wonderful and the feeling of warmth and care radiate from everyone.

hi im looking for a carpenter/ carver that i bought some goods from when i was last in the village two yers ago. do you know of his email address hes on the main road.