When in 1962 he was officially granted his name and a birth certificate, Nikifor Krynicki, aka Jan Nikifor had already been famous, and was soon to be en route for an exhibition of his works in Bulgaria. Years before though, he lived as a despised, half-witted cripple, an illegitimate son of a Lemko beggar, Jewdokia Drowniak, who made her living by doing menial jobs in Krynica pensions.

The most famous rumour about Nikifor attributes the fatherhood of Nikifor to Aleksander Gierymski, a renowned 19th century Polish realism painter. Nevertheless, born on May 21st 1895, Nikifor spent most of his lifetime in extreme poverty and isolation, due not only to his social status and Lemko roots, but also a speech impediment that prevented effective communication. As it later turned out, the condition he suffered from was ankyloglossia, or tongue-tie, and also a hereditary hearing impairment.

Living a vagabond life after he was orphaned by his mother during WW I, Nikifor roamed the towns of Galicja, the southern part of Poland. In the course of political purges of the Lemkos and other people on Polish-Ukrainian border, Nikifor was thrice resettled, even as far as Szczecin on the other side of Poland, but he'd always come back, either not conforming to official decrees, or simply being ignorant of them.

It is estimated that Nikifor's artist worklife had begun ca. 1915; the oldest preserved painting is dated 1920. He was a self taught painter, barely literate, signing his works with the name 'Matejko' (after one of the greatest Polish artists of the 19th century historical painting, Jan Matejko), or Netyfor, often with spelling errors. 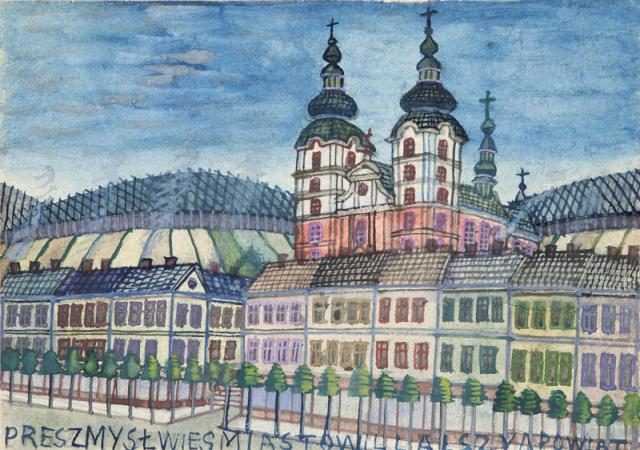 He'd always introduce himself as a painter, as he perceived it to be his one and true calling. Consumed by painting, Nikifor would spent his days working on the next drawing, or presenting his works for sale to Krynica tourists on the main promenade near the Spa House. In his works Nikifor used watercolours, sometimes combining it with tempera or oil, and the selection thereof depended on the painter's assets at the time. His canvas was all he could get his hands on, including old administration forms, used hotebooks, or wrapping paper. Also, due to poverty he commonly reused his drawing paper, creating duplex pictures.

It is estimated that in his lifetime Nikifor had produced ca. 40 000 pictures, never repeating himself. The majority of his works has been either lost, or given away, or sold. His particular inspirations was the lavishly decorated Greek-Orthodox churches in Krynica area, as well as the landscape and the people. He often drew self-portraits, revealing his ideas of himself, sometimes very high and noble.

Before 1960's Nikifor struggled through life, carrying with him a picture beggar letter with a plea for food, money or a piece of canvas, offering a picture in return, and was somewhat a living landmark of the town. His art was first discovered in 1930's by an Ukrainian painter, Roman Turyn, who shared the news of Nikifor with both Polish and Ukrainian kapists or colourist painters residing in Paris. The first publication on the artist appeared in 'Arkady' magazine in 1938, written by Jerzy Wolff, a major buyer of Nikifor's works. The elation on his works, especially the colour management did not, however, bring any improvement in Nikifor's situation. He still remained a pauper and an outcast.

His star did light up at the dusk of his life, when he was rediscovered by Andrzej and Ella Banach, art critics who have published articles devoted to Nikifor and his works, as well as a book 'Nikifor, the master from Krynica' (published 1975). The Banach couple had become the primitivist's benefactors and spokespeople, both contributing to organizing his exhibitions, and taking every day care of him until 1959.

The 1959 exhibition in Paris Diny Vieny gallery was the first individual presentation of his works, and a start to many to follow. His works have been exhibited in Amsterdam, Brussels, Liège, Haifa, Baden-baden, Frankfurt am Main, and Hannover. His Warsaw exhibition, followed by honorary membership in the Polish Visual Artists' Association brought interest in his works, which had then been franticaly bid for by the tourists in Krynica. Nikifor's financial problems had ceased definitely, though he wouldn't change his lifestyle not one bit, roaming the streets of Krynica, and immortalizing its daily life, as he'd been doing all his life.

A life of wandering left a notorious imprint on Nikifor's well-being, as he fell ill with tuberculosis. Since 1960he was taken care of by a local artist, Marian Włosiński, who not only provided for Nikifor's lodging and medical care, but also shared with him his painting workshop, and later fought for preserving the appropriate place of his works in Polish art history. This unique relationship has been captured in an awarded motion picture 'Mój Nikifor' ('My Nikifor') by Krzysztof Krauze, with the matchless role of Nikifor, starred by actress Krystyna Feldman.

Nikifor died October 10. 1968 in a day care resort in Folusz near Jasło, north-east off Krynica. He is buried at Krynica local cemetery, with 'Nikifor Krynicki' spelled in Polish, and 'Epifanij Drowniak' in cyrylic. The latter Lemko name has been ligitiously restored to him by the efforts of the Lemko Union in 2003.

Today, Nikifor is considered a popular representative of European naive art in the 20th century, and both the Nikifor Museum and his monument in the heart of Krynica remind the locals and visitors of the close bond between the artist and his hometown.

See the trailer of 'Mój Nikifor' (in Polish)

An amazing artist, and a terrific film as well. I learnt a lot from this article.